There have been several independent power projects (IPP) constructed in the area in the past five years. Fire, Stokke, and Douglas Creeks have been completed and producing power for the grid and sending hydro power off to parts unknown.
This year they have been working on another on Trethewey Creek, which flows into the top end of Harrison Lake. You have heard me go on about the small hydro system I have for power here, but these ones are on a much grander scale.   I've been dying to go have a look at an IPP under construction, and make sure they are doing it right, but you don't just wander in there expecting to get a tour around, even if the watershed was named after a relative, although I suppose they may have humoured me for a little longer before calling security and kicking me off the claim.
Back awhile my prayers were answered, and I received an invite to tour the project with some representatives of the InShuckch nation.
Earlier today, after standing out on the driveway for about an hour in anticipation, several vans pulled into the yard, "Hello neighbor!" shouted Eppa, the chief negotiator out the window.
I wasted no time piling in, while it was still rolling I think, and headed straight for the back seat to sit with the rest of the troublemakers. The movers and shakers and decision makers from the InShuchch head office were along, and some important folks and elders from in valley here,...and me.
I think they invited me along to do the work if we got a flat tire or something actually.
After about an hour of bouncing in our seats we arrived at the Tretheway project camp. 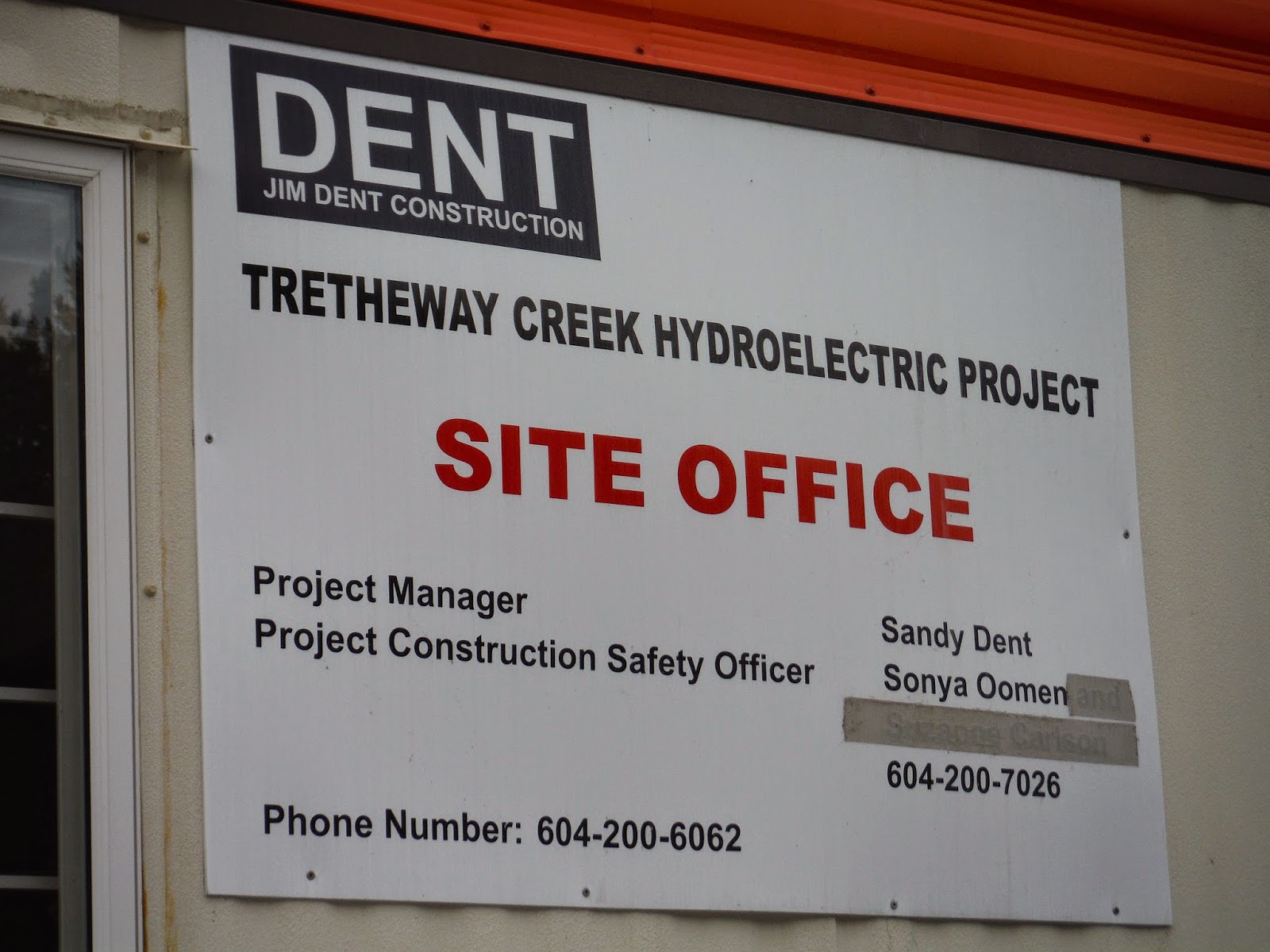 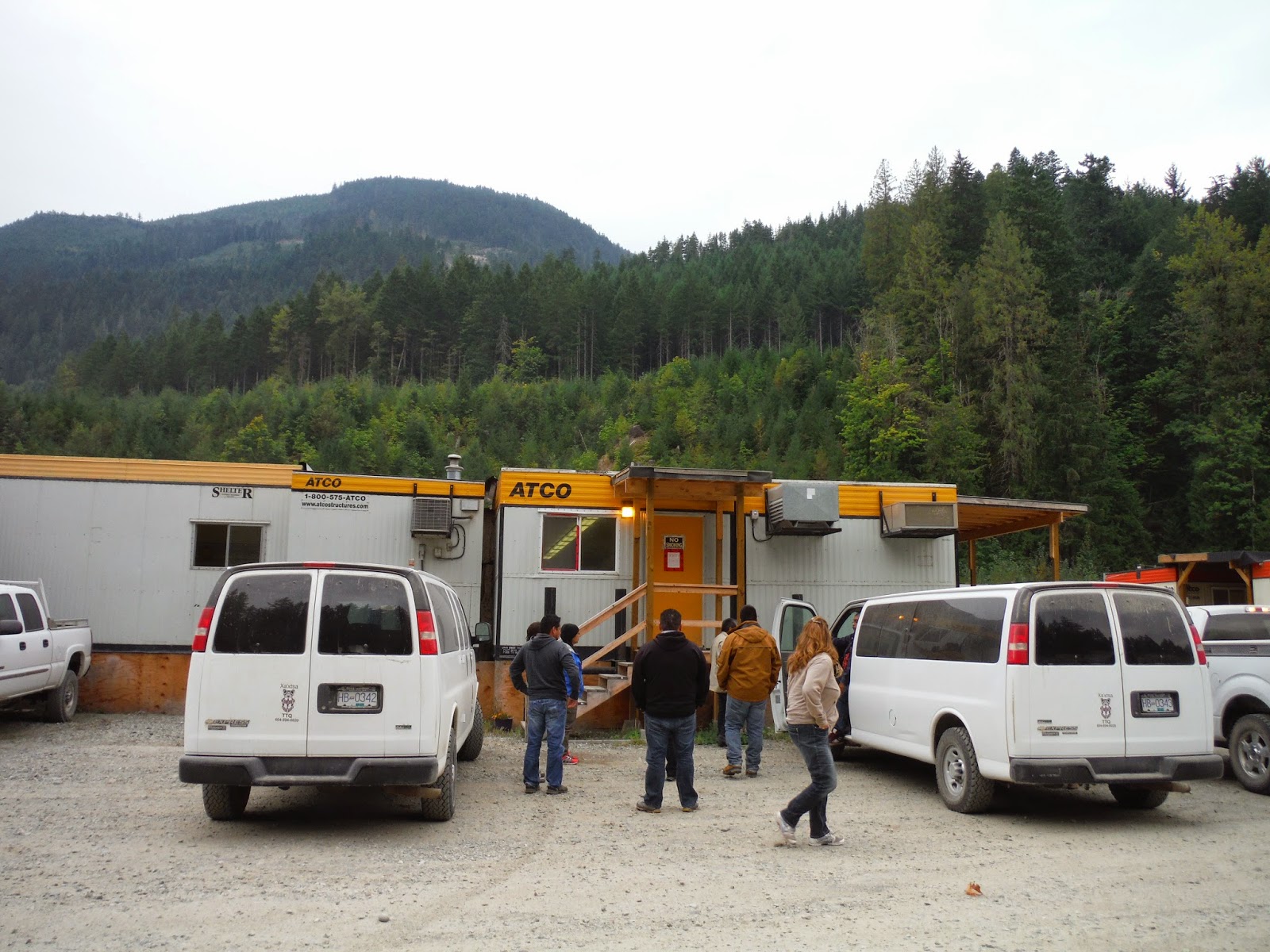 Everyone piled out and ran and lined up at the washroom door, I took off way across the road and found a tree. 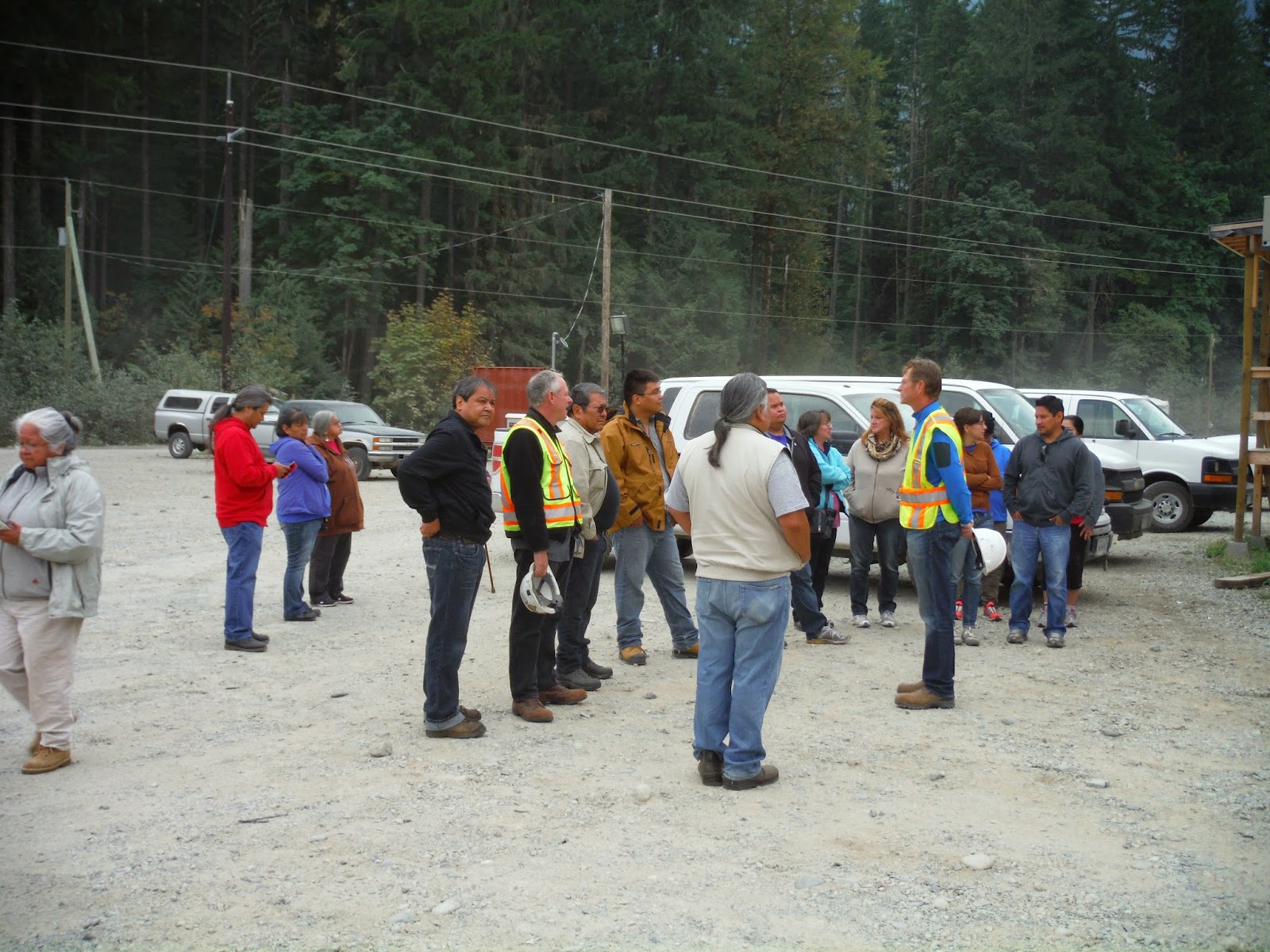 They managed to round us all up afterwards for a safety meeting. 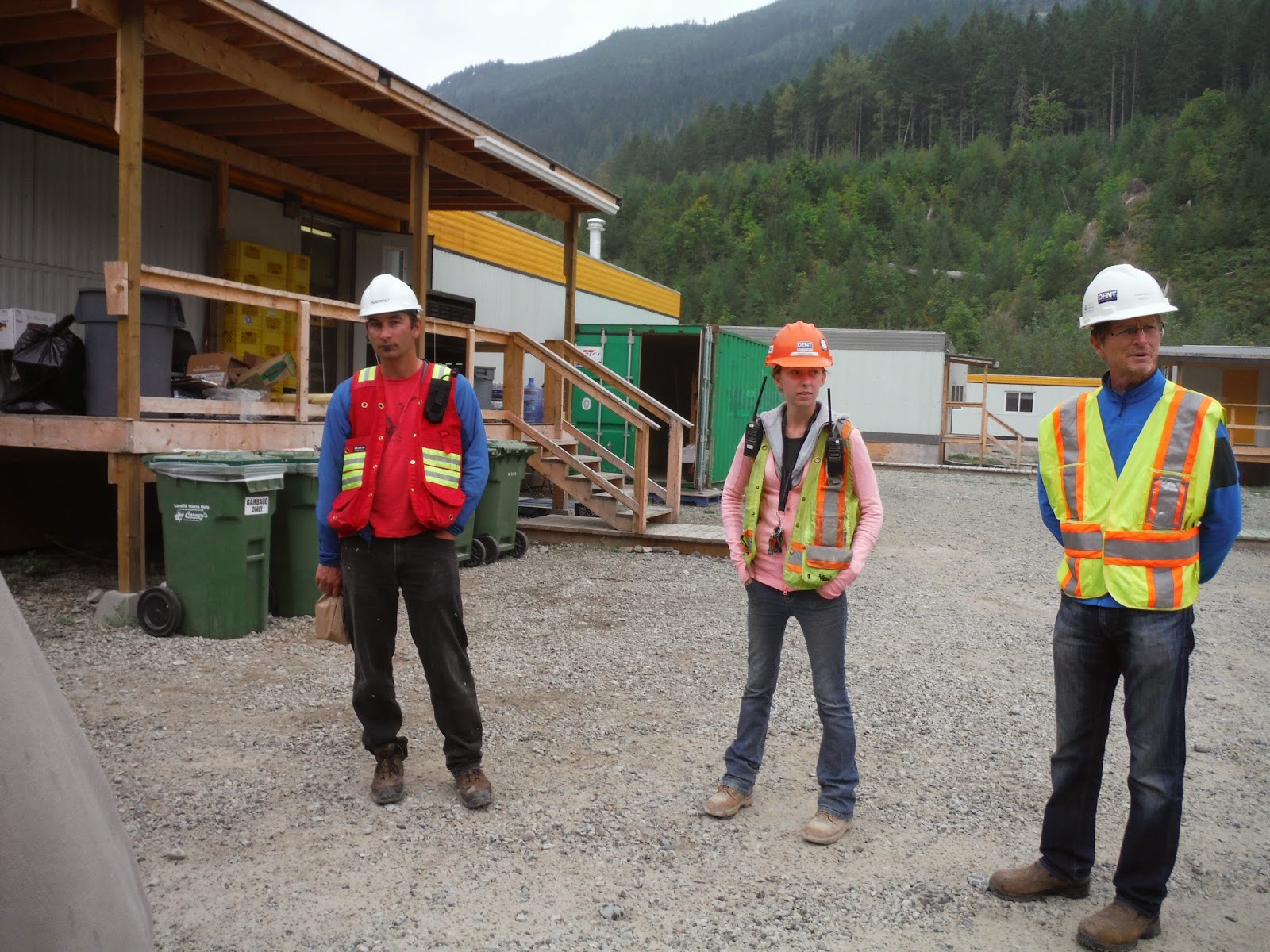 Jamie and Richard, top guys on site with Dent, the outfit doing the work, and Kristeen, the safety officer.

We followed the company truck on down the road and through the active job site, which extended several km up Trethewey Creek to the site of the intake dam. There were all variety of heavy equipment at work along the way and there were nose prints all over the inside of my window. 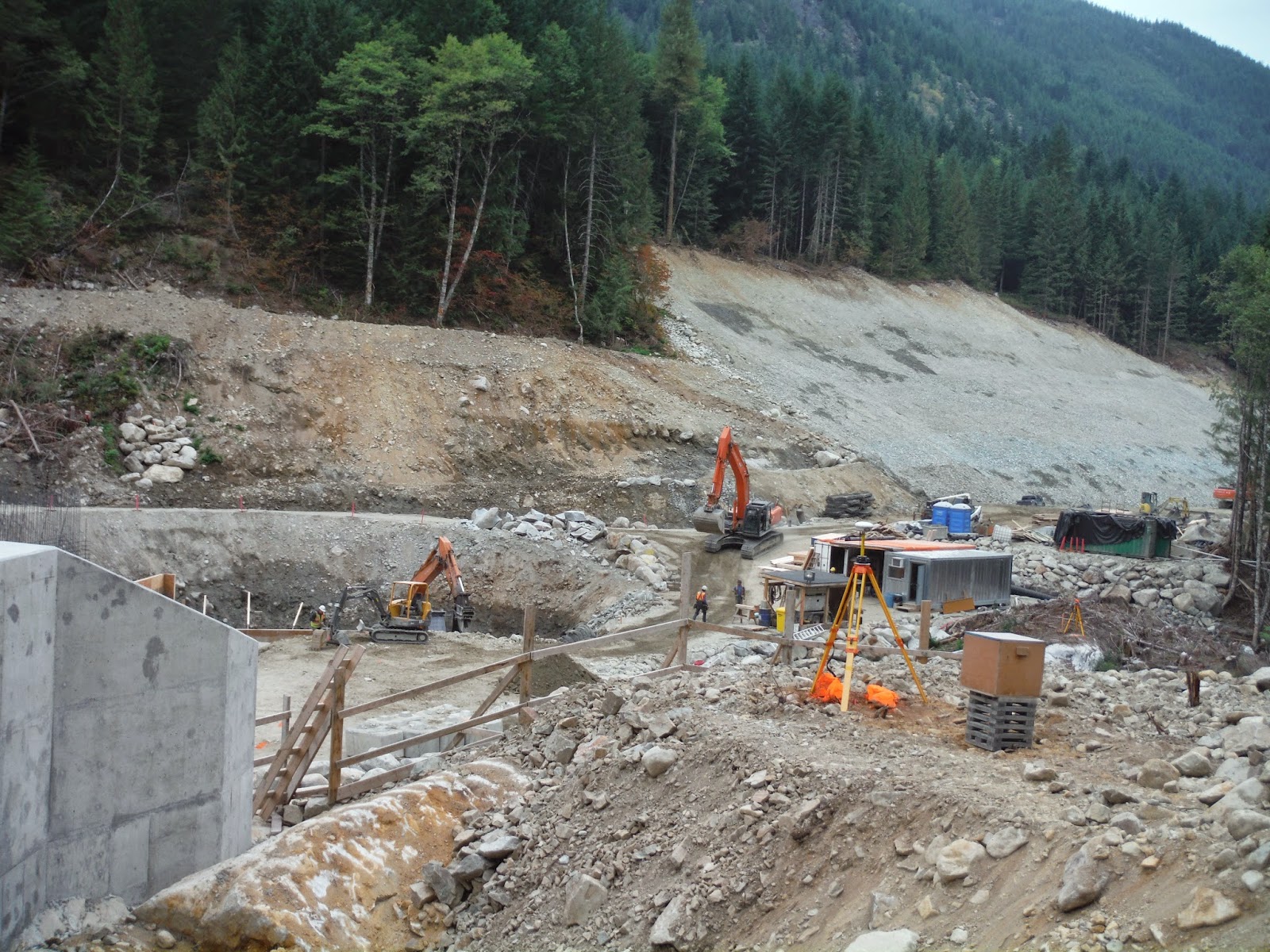 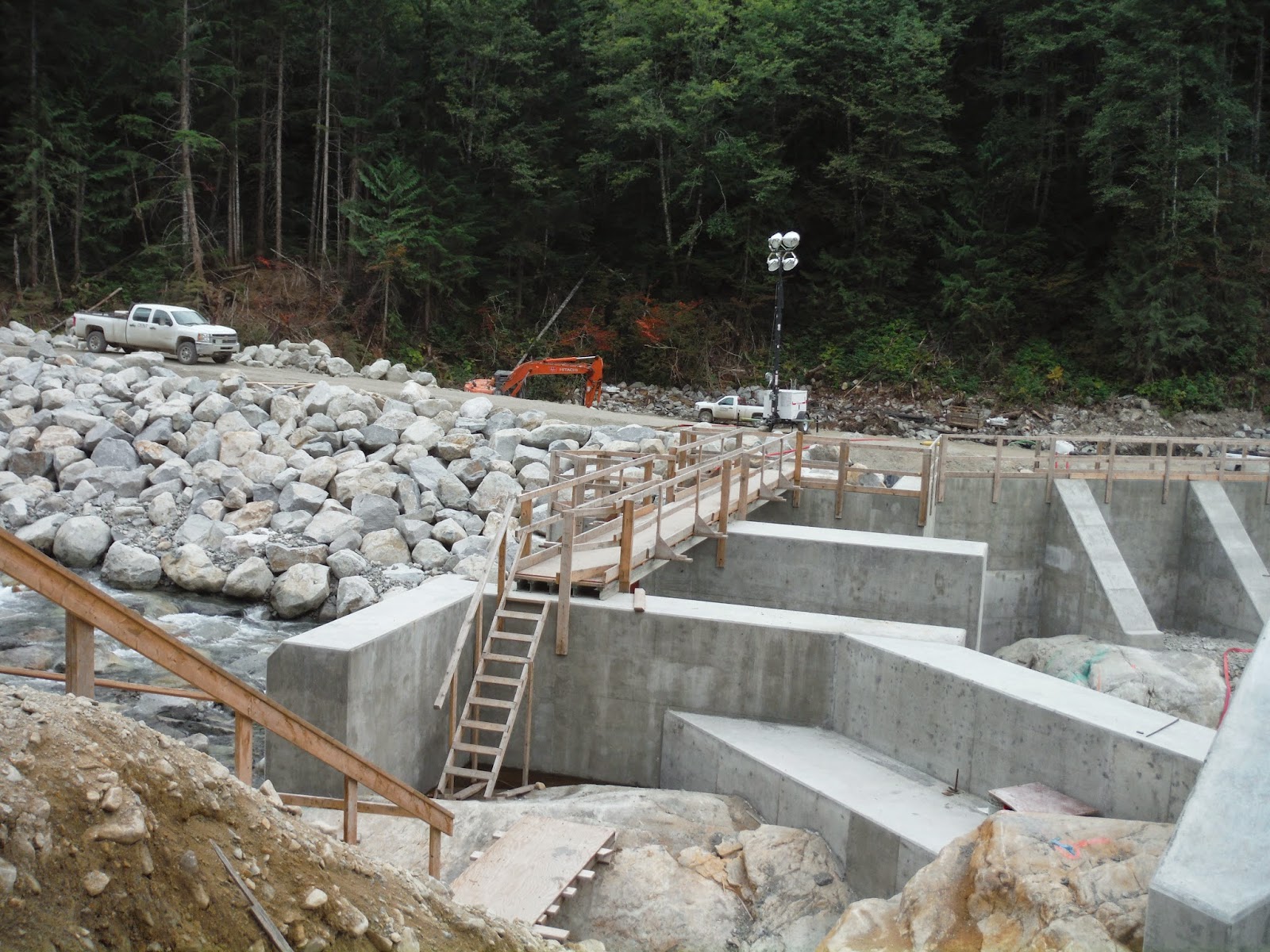 Trethewey Ck. intake dam under construction.
Looks like they don't need any of my advice around there.

The first phase of the job was to lay the pipeline, or what us IPP guys call the penstock. 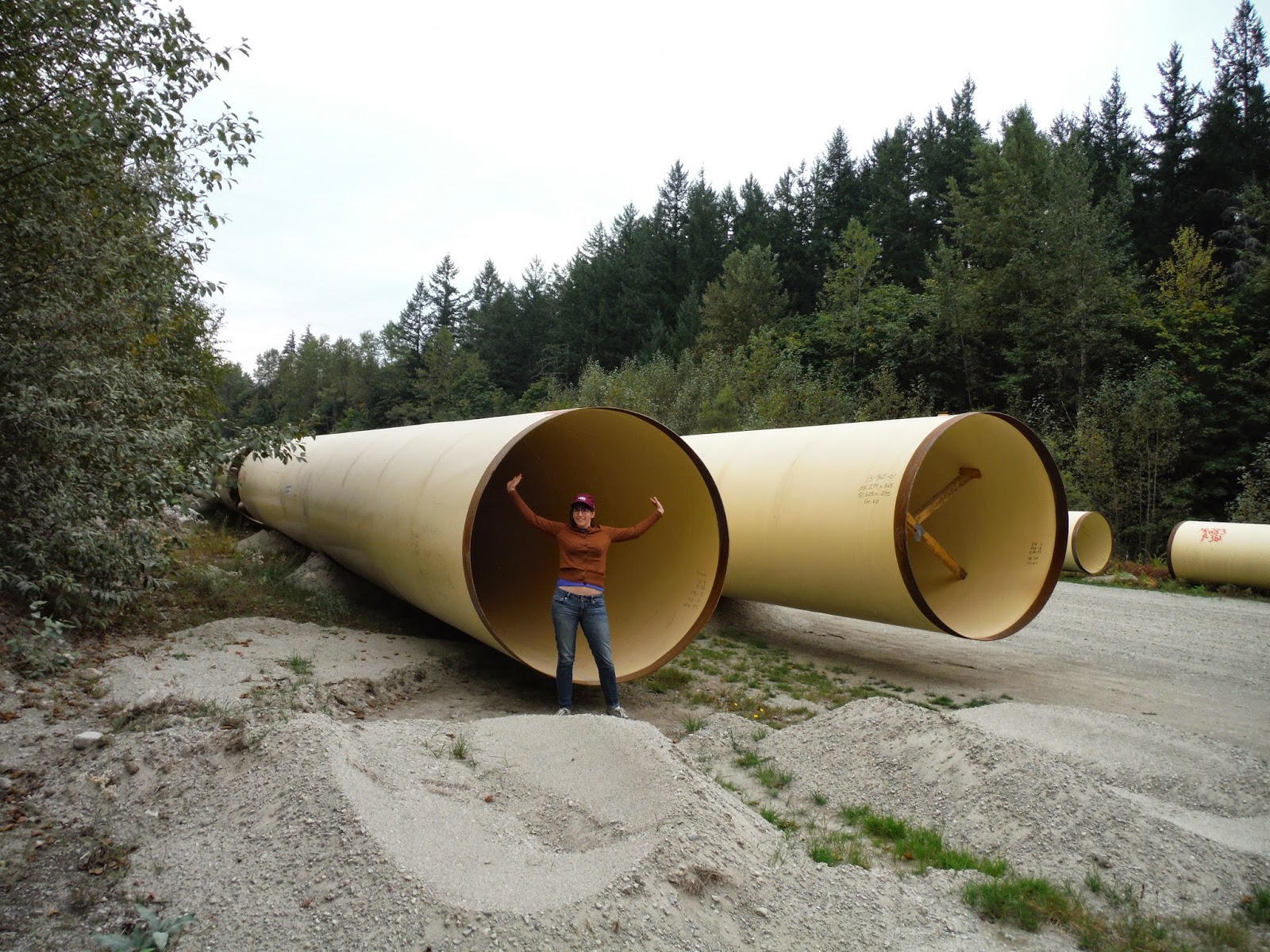 The penstock sections big enough for Elanna inside were stored all over the Tippela airstrip during construction. 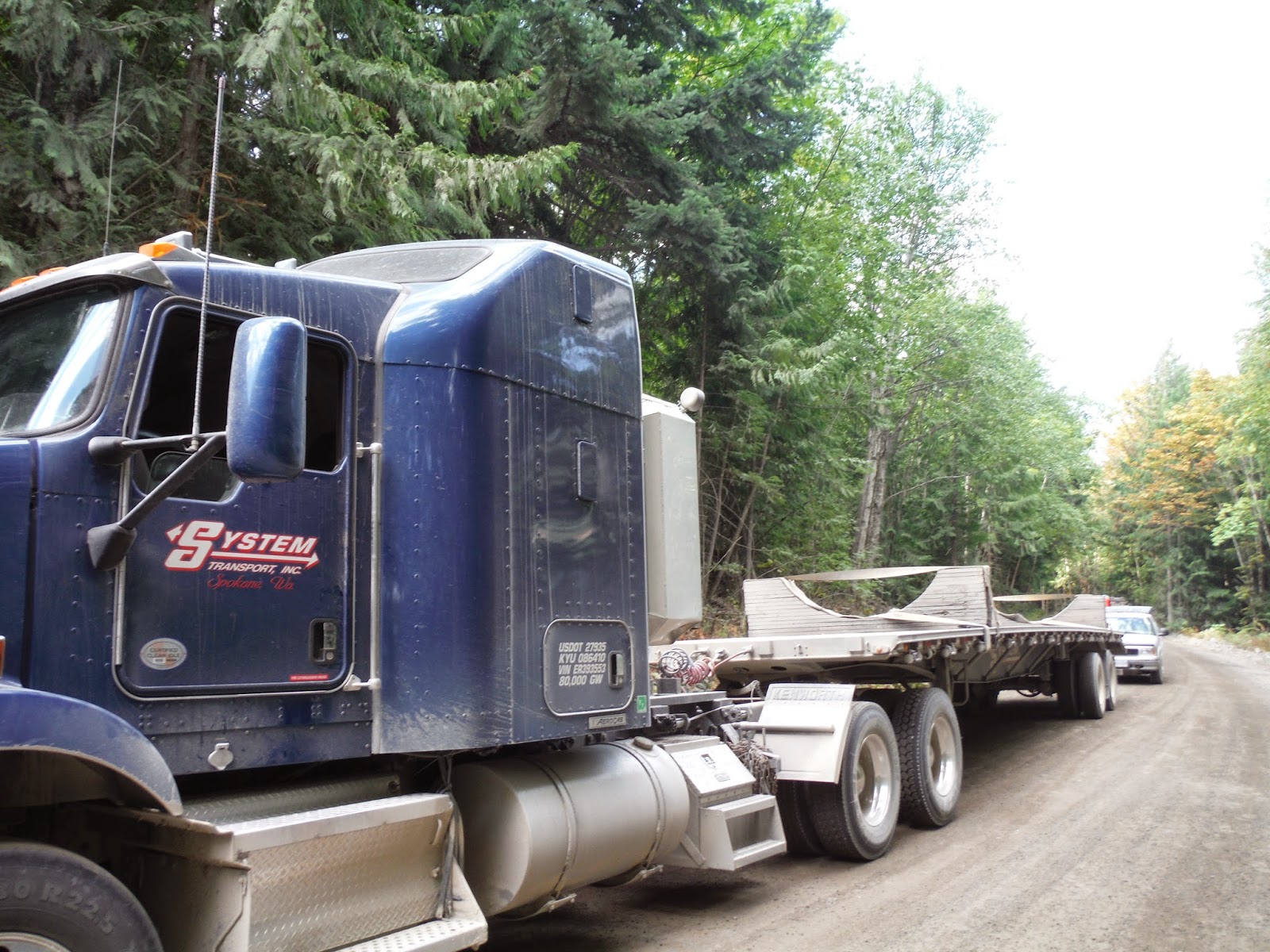 I had been seeing theses trucks tearing by all season and wondered where they hauled from. Last July I was waiting at a road closure on the lake road and chatted up this driver from Spokane.  He told me the penstock sections came from Portland Oregon, one at a time, and at that point there had been over 300 trips. 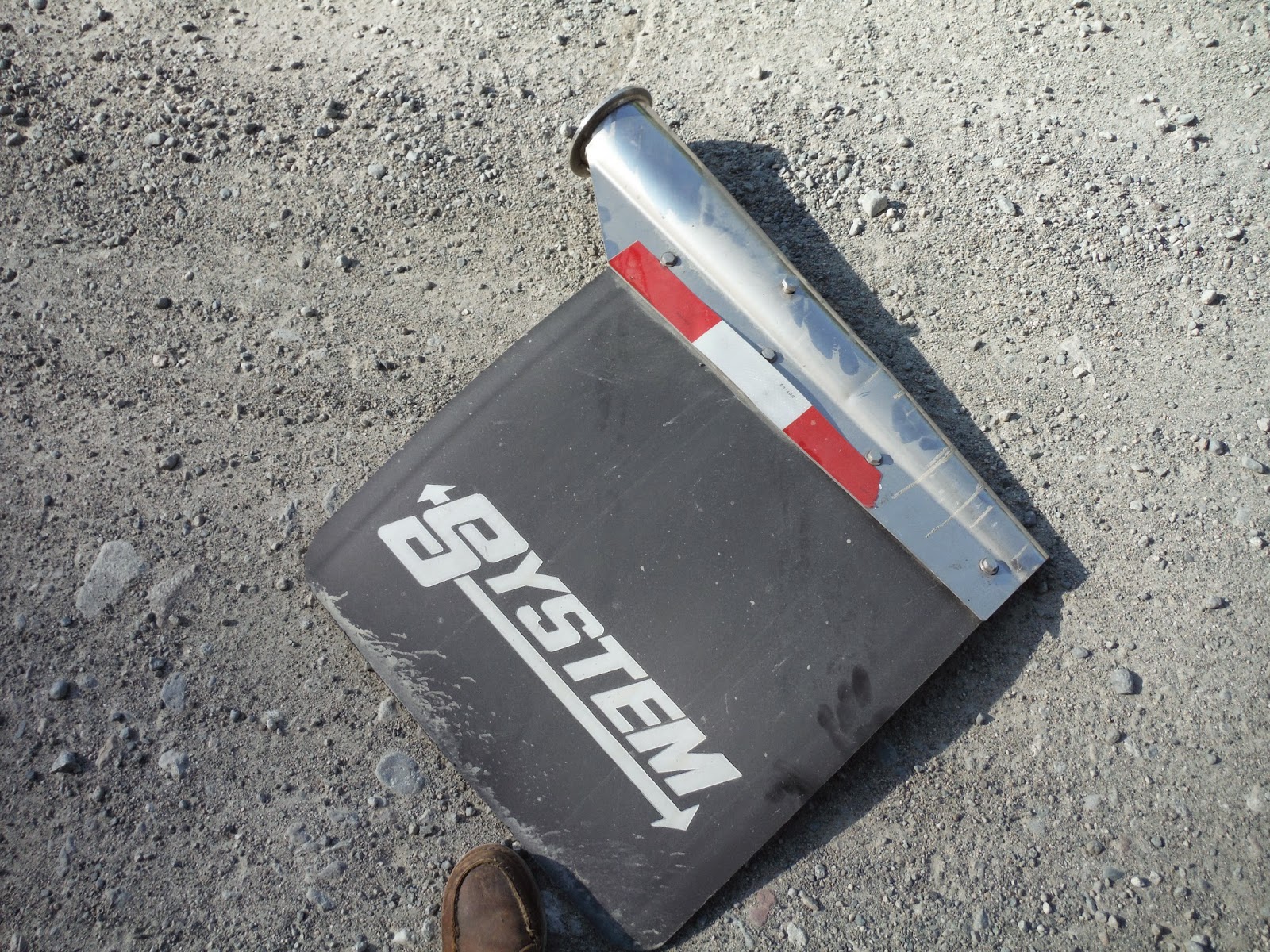 The road took its toll on the trucks, and it wasn't unusual to come across parts and chunks of trucks on the road. This mudflap I had to stop to see if it was of any use to me. It wasn't, so I threw it in back and set it out at the end of my driveway. Pretty soon word got out on the truckers radios and soon one stopped out there, picked it up and gave a big grateful wave.
Probably saved him a couple hundred bucks.
The penstock sections were stored on the airstrip then taken up the mountain, set in place, in a particular order of course, welded together, buried in a trench, covered over, and the area reclaimed somewhat. We drove down the hill from the dam alongside the buried penstock, following it down to a point just above Harrison Lake. 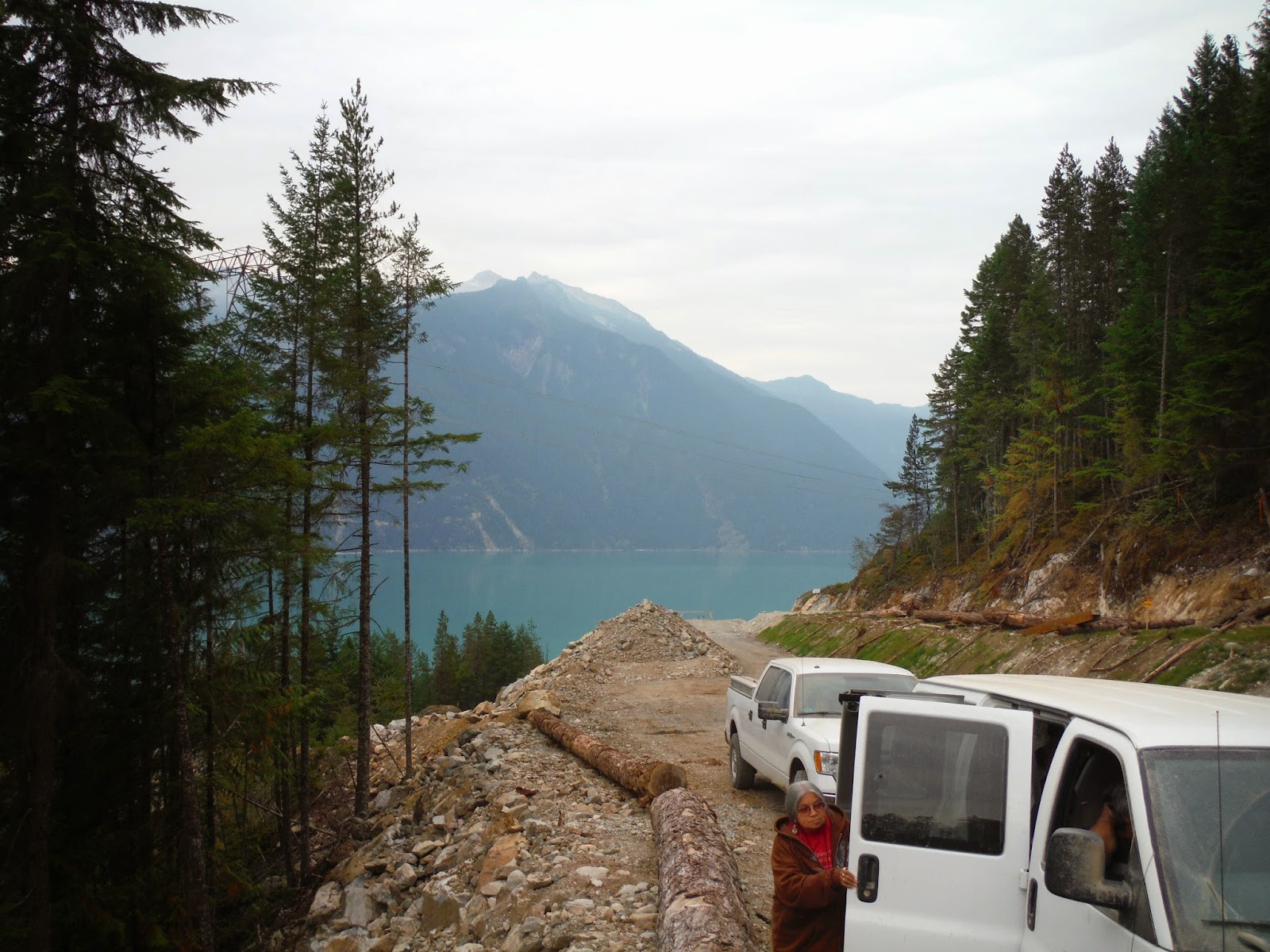 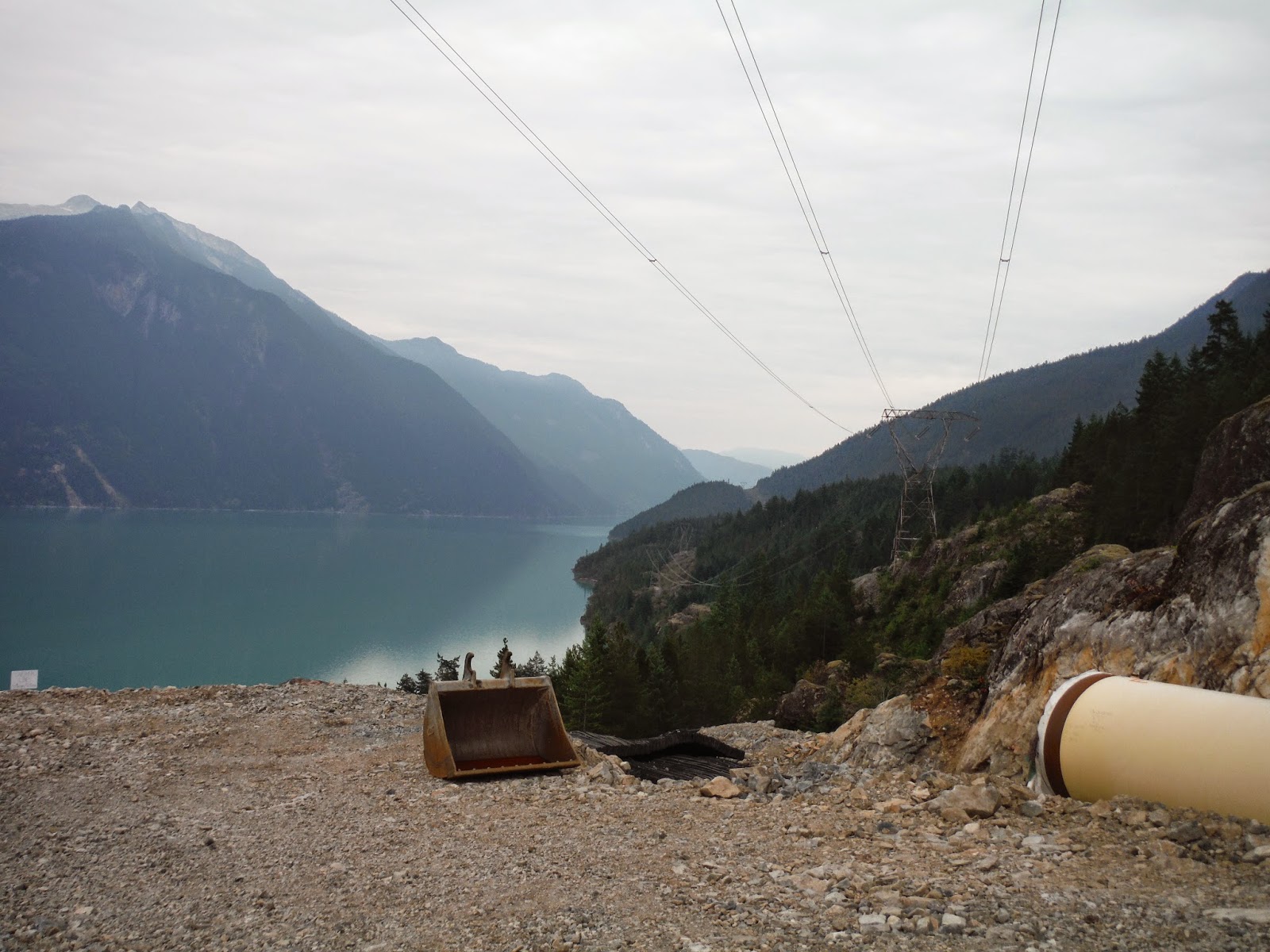 There the penstock ended, for the time being at least.
The generator site under construction is down on the rugged shore of Harrison Lake. 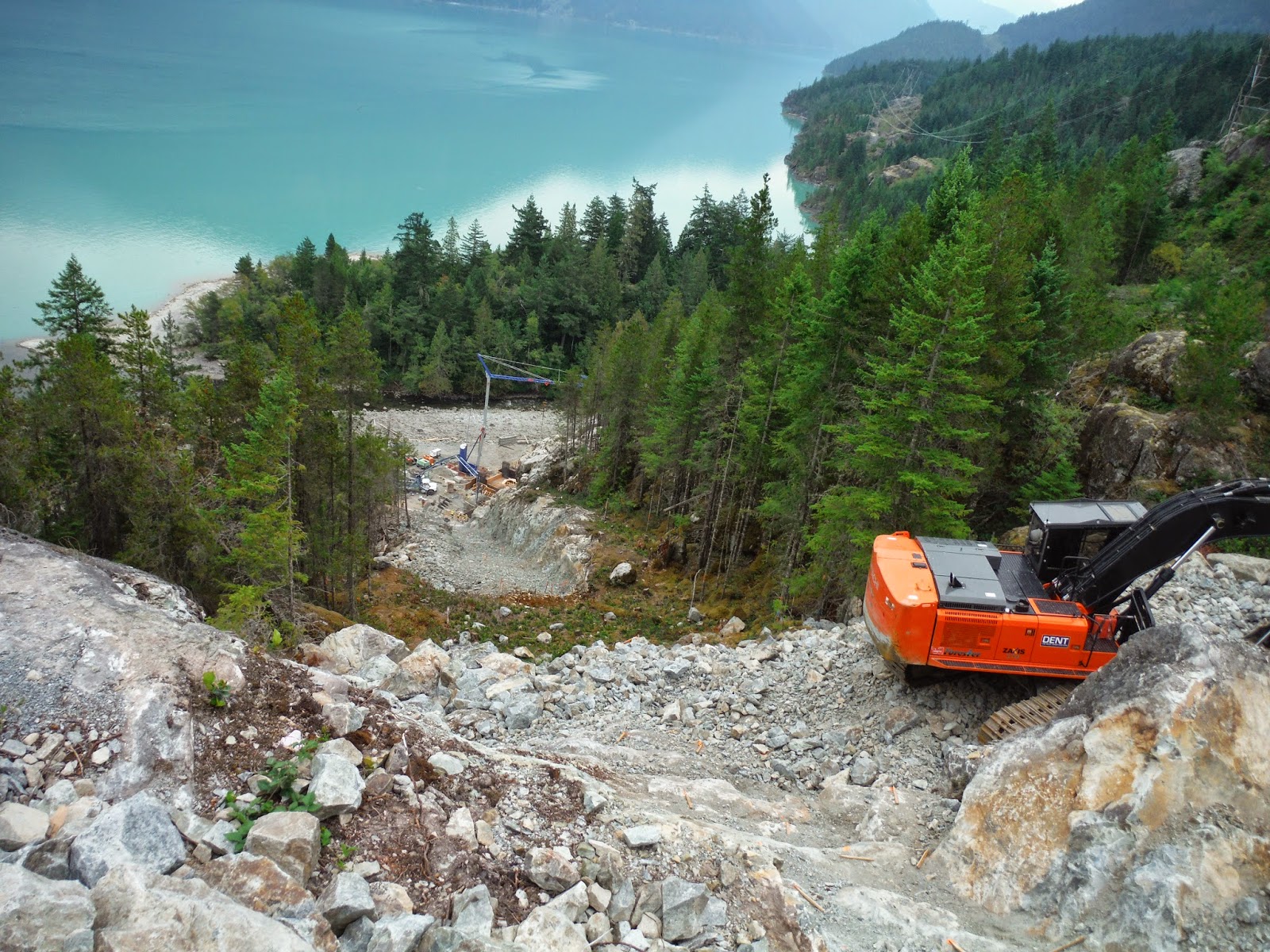 This gives you an idea of the rugged country they work in. Once the generator station is in place, they will continue the penstock down the steep cut to power the turbines. 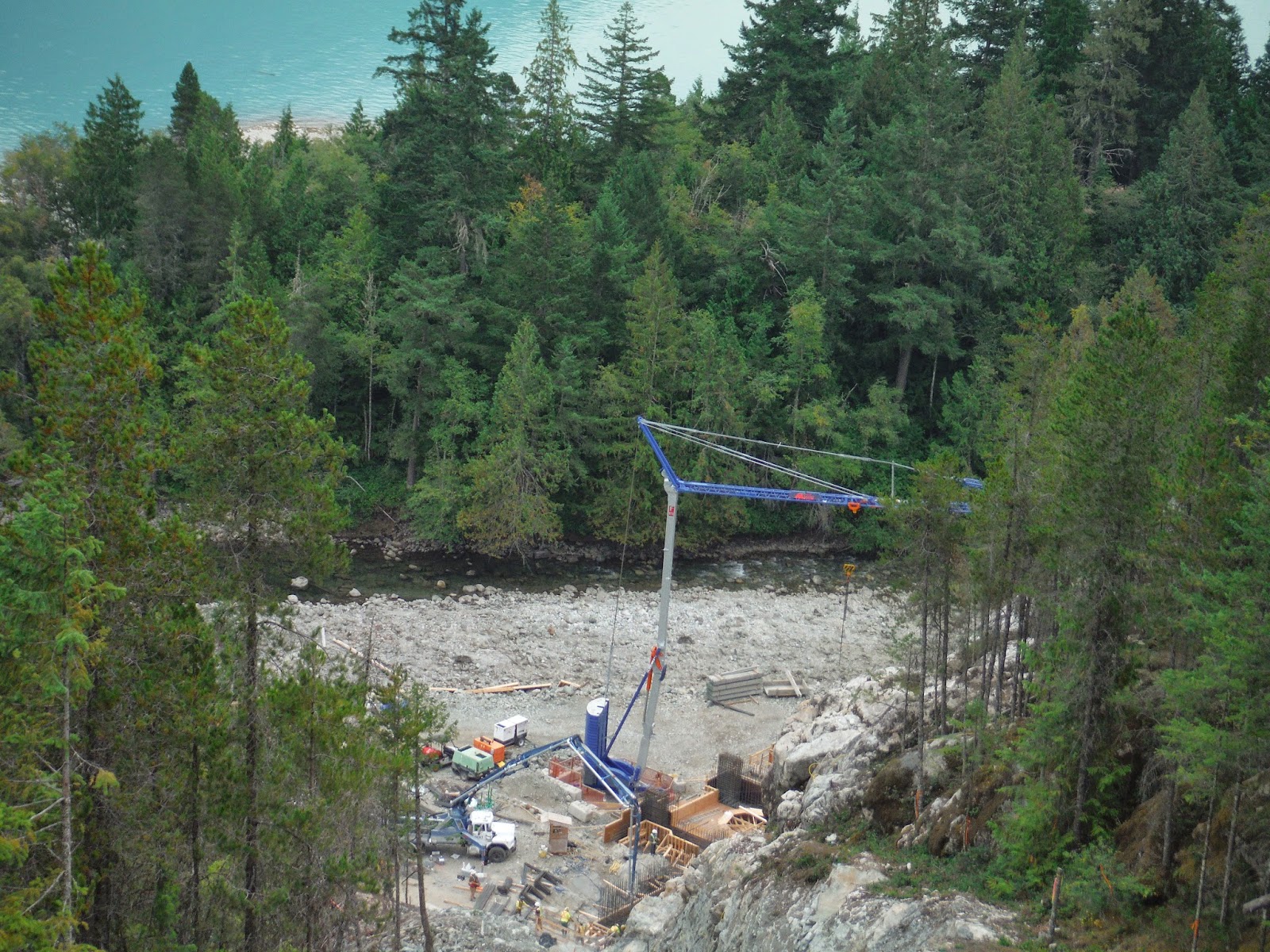 The power station site is accessible only by water, all the equipment is floated in there on a large barge big enough to carry 3 cement trucks at a time. Another IPP at Stokke Creek is directly across the lake, ready to go, when this site is completed, a submarine cable layed across the lake bottom from Stokke will connect to the grid here.
Looks like they are doing alright without me there too. 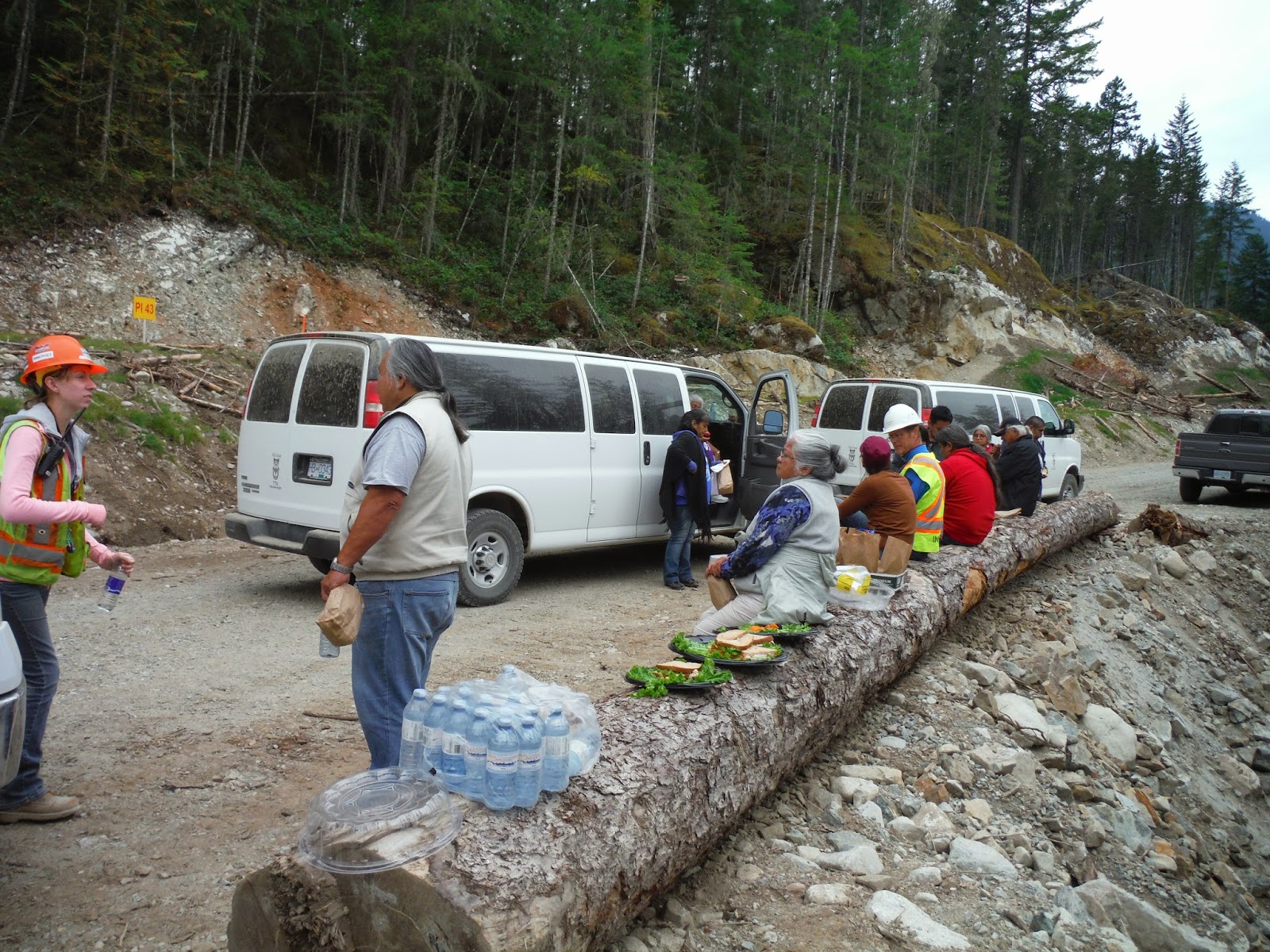 We took lunch on the side of the road overlooking the lake, and I really dug into the egg salad sandwiches. I had a good chat with Jamie, the #2 man on the project, I thought he might have a few technical questions to run by me, but I guess he couldn't think of any right then. He did tell me the flow of water in the penstock when it is operating will be a little over 11,000 litres per second, and the penstock pipe was engineered for 50 years life, but in all probability could last 100 years. I asked him about the generator its self, made in Norway he said, and they special ordered two units at a cost of around $12m. Jamie is from New Zealand has been involved with the project from the start, and during his studies of the area and history he said he kept running across the Trethewey name. He was familiar with the logging and power line construction years ago, and my great grandad Joe who discovered the Providence mine on the shores of Harrison Lake, not far from where we had lunch. He said he had some friends that spent some time around the hot spring here and I guess he's heard about me some too.
I didn't ask him to elaborate, just in case.

The second part of the tour I was looking forward to the most. The Fire Creek IPP has been producing for 5 years now. It was a fairly steep road up to the dam site, and almost at the top the transmission in our van gave out. We re-sorted ourselves into the remaining vehicles and continued on our way. 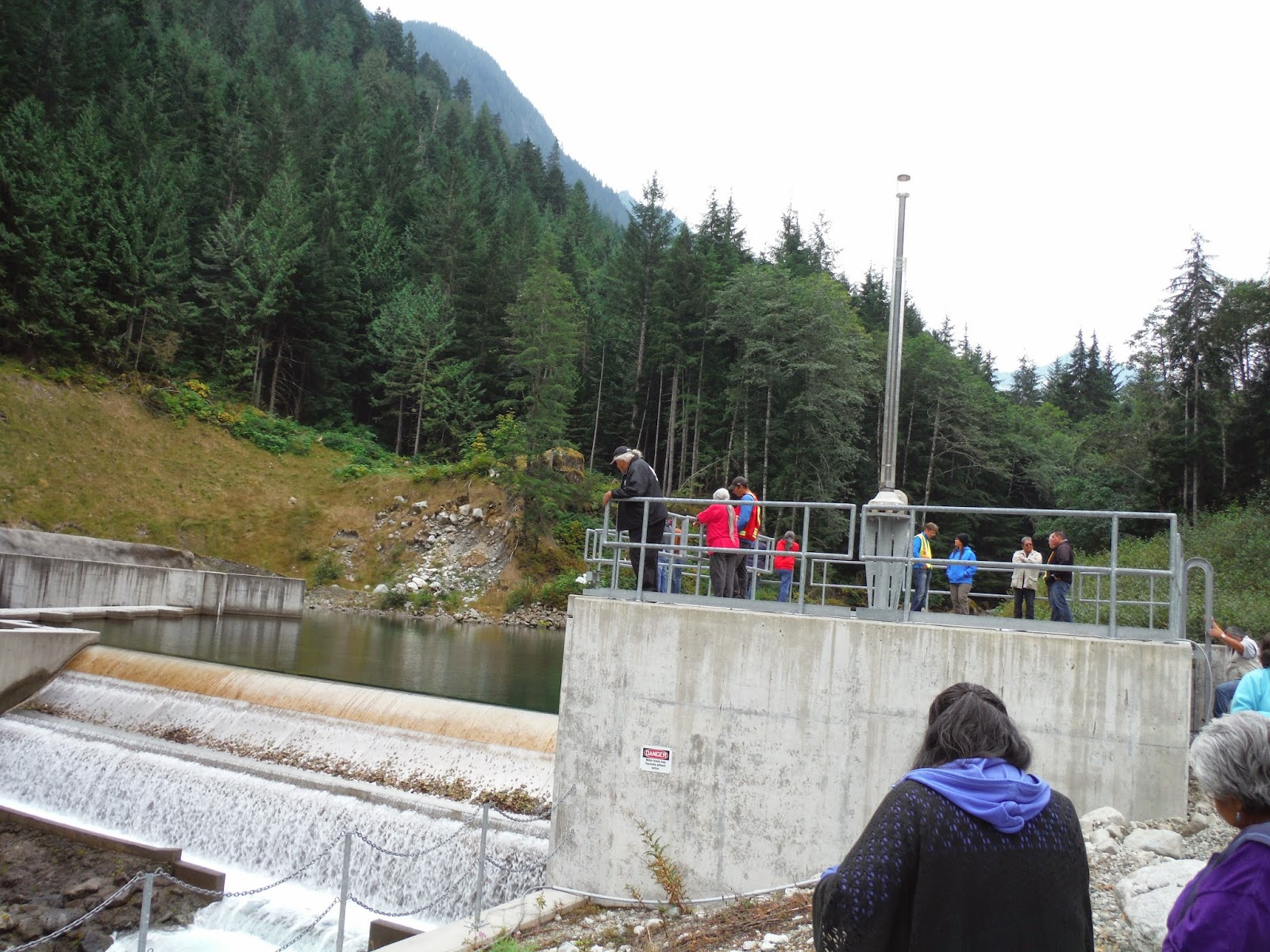 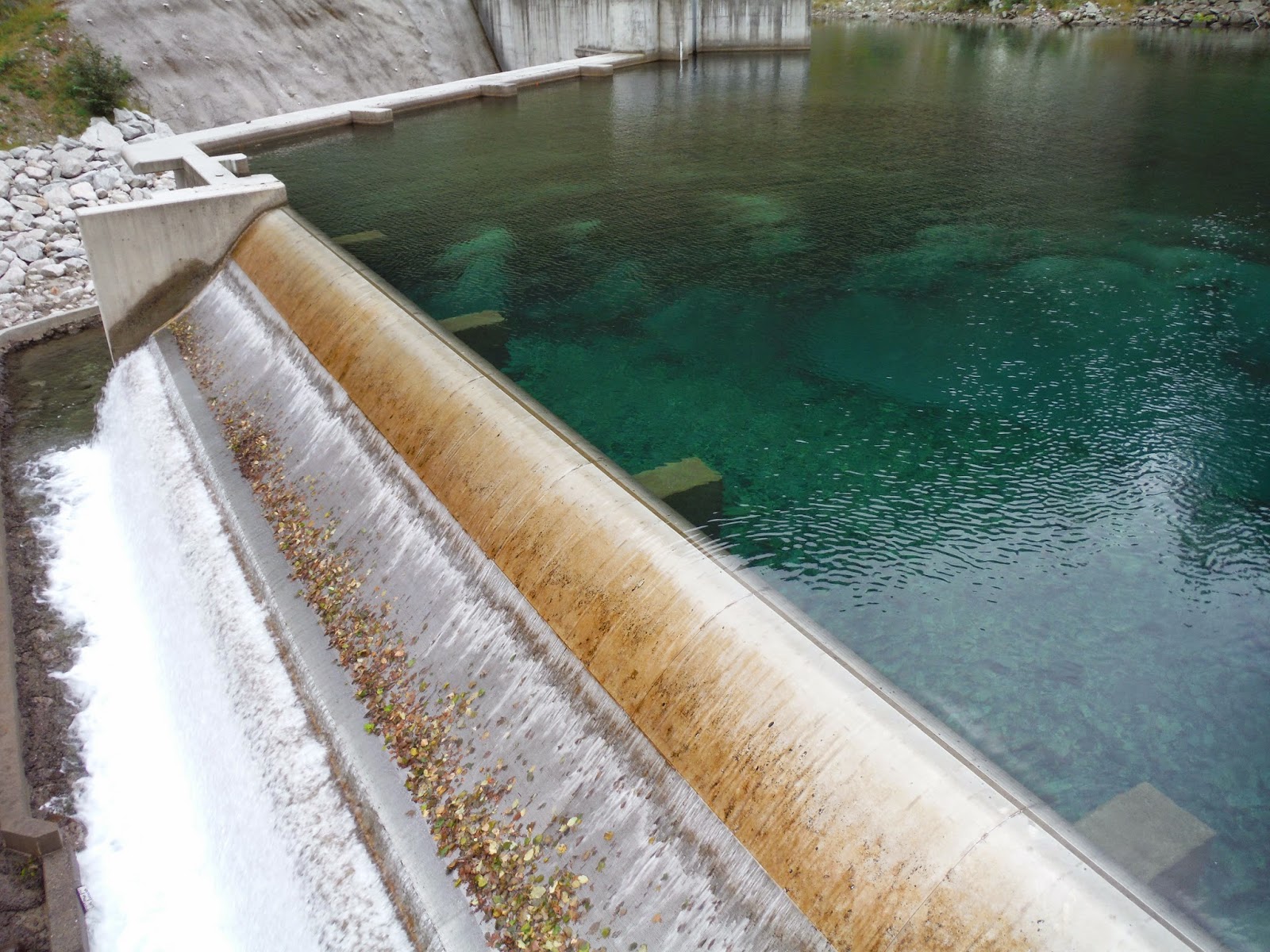 The water flows over a stainless spillway to smooth out the flow, then over a stainless screen to filter out most anything but the water, fish included. That debris you can see is leaves hung up on the screen, they will wash off with increased water flow. 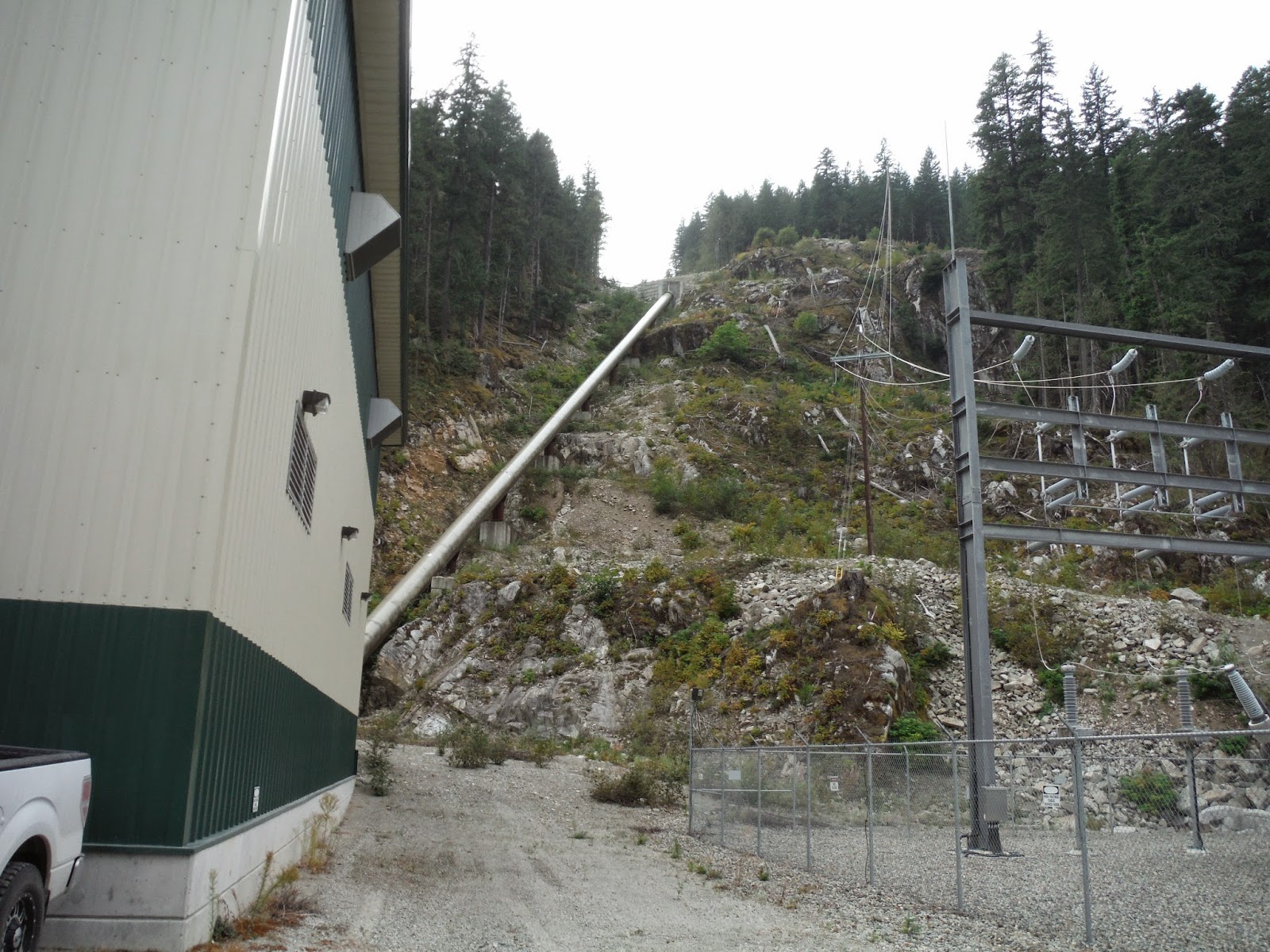 The penstock runs downhill for 4-5km to the power generation building at Tipella. 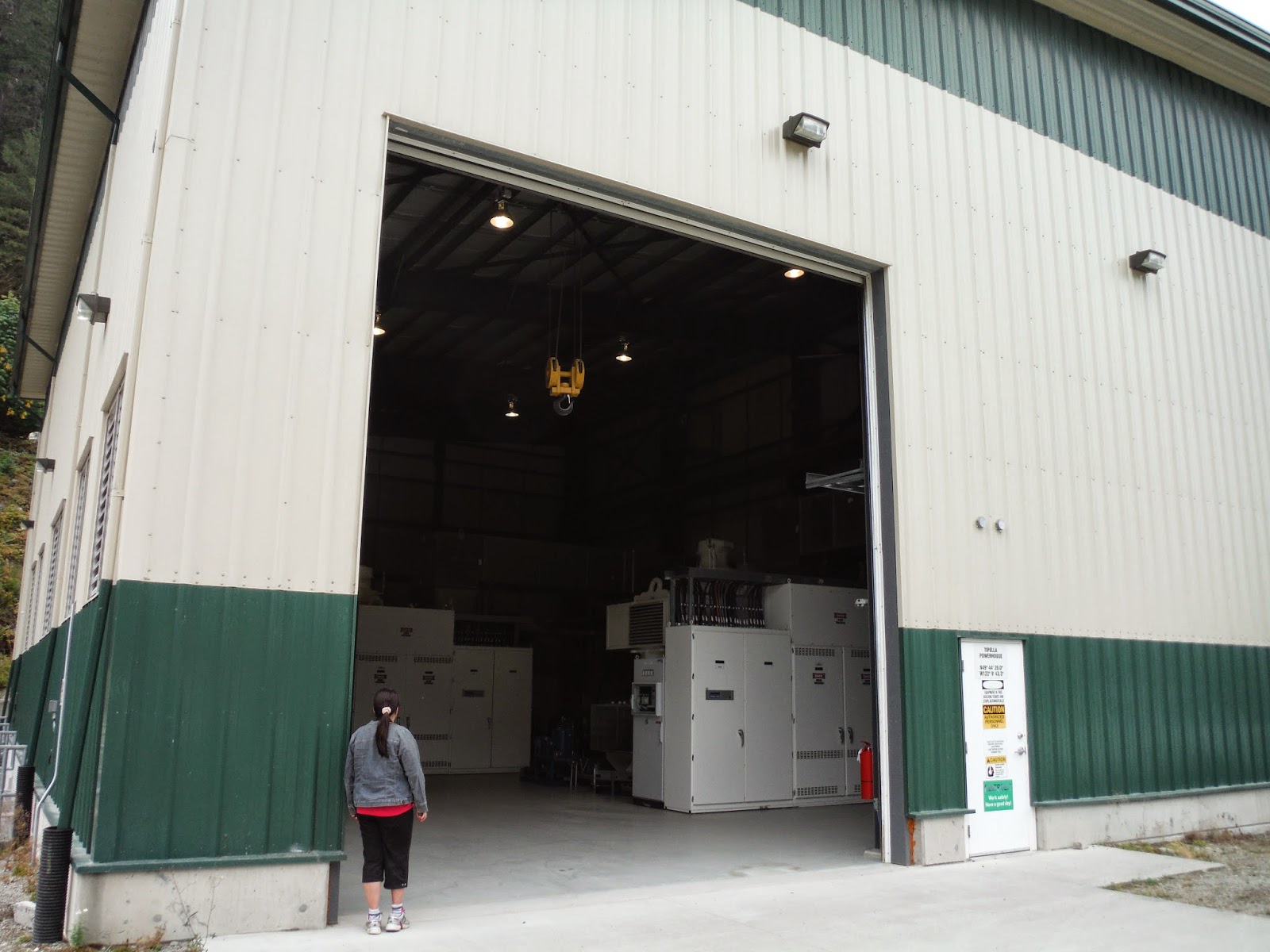 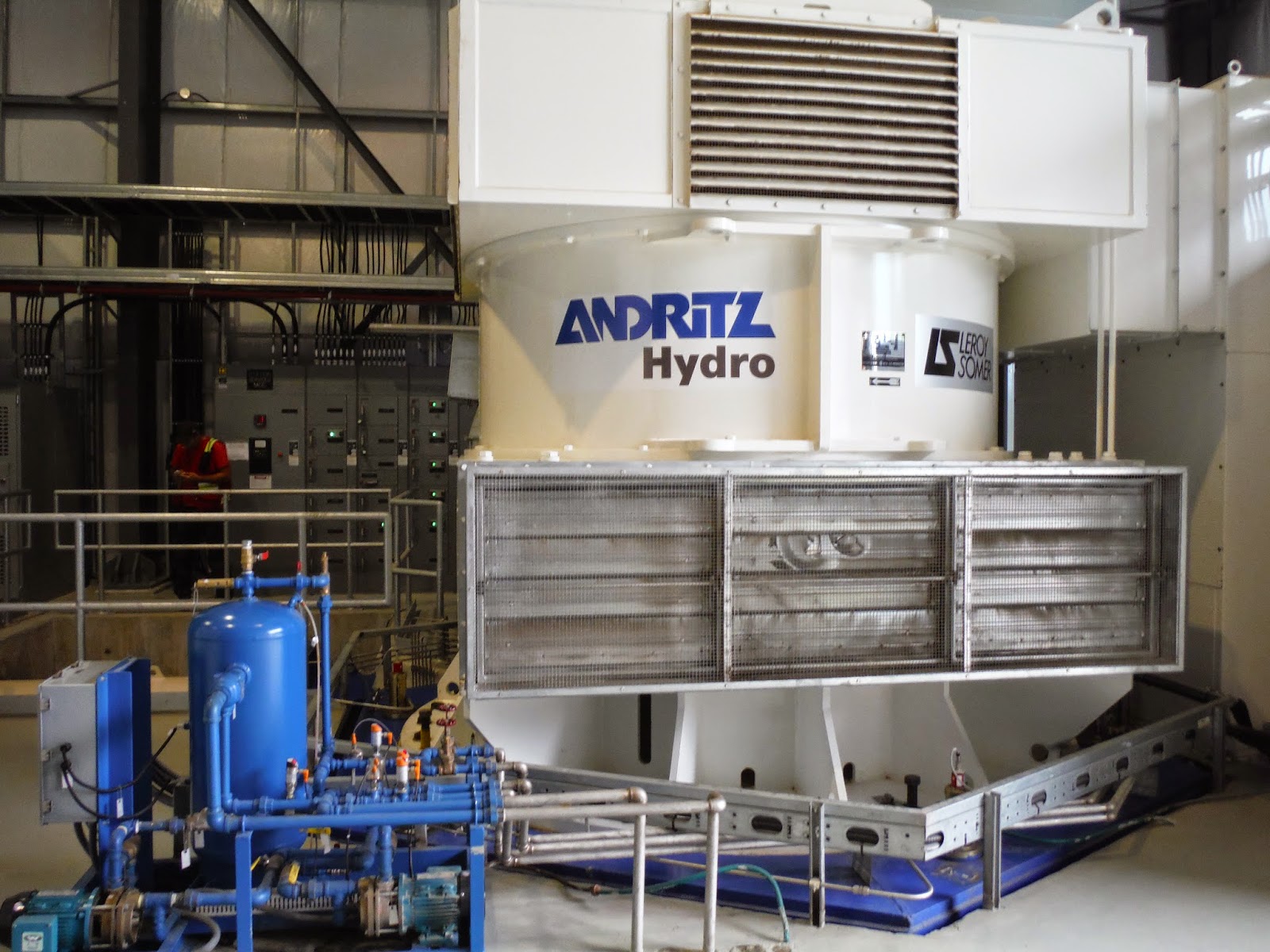 The water pressure turns this huge generator at 800 rpm.
Energex is the outfit that puts these projects together, and operates the working systems.

Some well meaning folks entitled to their opinon tend to get up in arms about these IPPs. They show up during construction taking videos and carrying on about the destruction of the habitat, which is an easy sell out there with some. Of course its going to look like hell, but come back in a few years, and it will look much different. In my opinion, considering the scope of the project, habitat disturbance on the long run, is minimal. Consideration of the creek and habitat is number one priority, and these projects would never get off the ground if that were not the case. There are independent environmental observers around all the time to make sure everything is done properly. Nature heals well, after a few years it grows back to the point someone driving up the Trethewey Creek road may not even realize they are driving next to a buried penstock.
The IPP's generate income for the local InShuckch people, provide jobs, and contribute towards road maintinace out here. If people want their gadgets they are going to need power to operate them, hydro is clean, green power for the future, and there are plans for several more projects in the area.
You might be using power from out here to charge your phone right now.
Posted by Robin T at 1:14 AM

Robin T
I'll write about what I know, and what I've done. I've raced motorcycles, fixed them and answered the phone. I've worked with heavy equipment in the north, mined placer gold in the Klondike, and saw-milled timbers in the Central American jungle. For 20 years now I've lived at a beautiful, historic, remote hot spring property with a water driven generator out in Indian territory. Sometimes I'm called upon as a musician. I've been fortunate to have done some really cool stuff too. Those are the experiences I will share. Enjoy.